The 2003 NEAT Fair was again a tremendous success. 279 pilots, 42 vendors and approximately 1300 spectators descended upon Peaceful Valley Campsite for a weekend of "flyin and buyin". Bob Aberle, Jim Reid, Frank Dellamura and I journeyed to Peaceful Valley the Saturday before to do the "preliminary" layout. This involves painting the pilot and vendor spots in the grass and laying out all the poles and snow fence to demark the flying

area. It was a beautiful day, bright sun, fair winds. Jim, Frank and I all brought a plane to fly at "lunch-break". 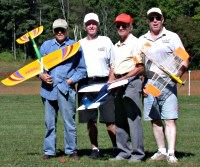 I returned to the campsite on Thursday the 11th. I arrived at about 11:30AM and the SEFLI crew that got there before me had quite a bit already done (Gil C, Bob A, Mike G). The caution ribbon was up, the raffle tent had been erected, and most of the HQ equipment was out of the trailer ready to be organized. Other modelers, including those from the Connecticut Silent Flyers pitched in to help with the field set-up. Shortly after noon time I set-up the "casual" frequency board for those that wanted to fly (though the lack of one did not stop some from flying before I got that done!). I had 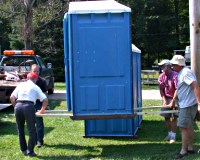 to set a crew off to move the porta-johns that were all clumped together around the HQ tent. They needed to be dispersed along the entrance road.

By late that Thursday afternoon, many of the 40+ vendors were in place and selling already. The front line of pilot pit areas was also quite filled. Though I left around 6PM to go back to my motel, I was told that flying went on well into the evening and well past dark for those who came equipped to fly at night!

Friday morning brought a bit of fog with it, but it cleared completely by 9AM or so to a glorious day; low winds and bright blue skies. The crowd came early and stayed all day, quite surprising for a Friday. The vendor areas were busy with people from early morning. Pilots began to register around 9AM and we opened the Tx impound around 10AM. This year we broke up the TX request line into two sections. Channel 11-34 TX's in one line, Channel 35-60 in another. Ham channel users could form in either line.

27 and 47MHZ radios were not impounded. These modelers could remain on the "casual" board. This split frequency board did speed up the flying process quite a bit when the lines got long.

Some 400 TX's were impounded on Friday.

As the day got long, some high cloudiness began to filter the sun. SKS

Video (www.sksvideo.com) was busy all day trying to get as much sun-lit footage for their coverage of the fair on Friday, as the weather was not expected to be as good on Saturday/Sunday. Predictions were for occasional rain, but at least it would be warm. I am told SKS Video should have a tape/DVD ready of the 2003 NEAT Fair around xmas. Our raffle tent did a brisk business all day selling raffle tickets (for some great prizes!), 2002 Videos, patches, t-shirts and hats. (There are some of these items still available for purchase).

Vendor row was still quite active, later in the day on Friday. The impound was closed at 5PM and pilots were allowed to fly on the casual board well

On Friday night, 165 modelers and their mates, traveled down to Roscoe to the Friday Night Kick-off Dinner at the Rockland House. This is the second year we have had the dinner there and it has been well received. Tom Rossio (owner) puts on a great food spread for us in the banquet room. One lucky male and female diner went home with a raffle prize.

I ventured back to the field after dinner to see how many people were flying in the dark. To my surprise, there had been quite a few flying while we were at dinner, but the field was rather quiet after 10PM. A few brave soles flew well after midnight in the calm air. A near-full moon was out, shinning through some haze for most of the night.

Saturday, I awoke to some locally dense fog. It was hard to tell whether the wetness around the area was due to the heavy fog, or that it truly had rained. On my 1/2hr ride back to the campsite from my motel, I did run into some drizzle. Arriving at PV at about 6:30AM, there was no rain, and the visibility was quite good. Many modelers began flying shortly after I arrived, figuring that if the day did deteriorate, at least they would have gotten a few flights in.

Steady rain never did materialize. It did drizzle now and again, but it did not keep guys from flyin', buyin' and yakin'. The winds were low all day, but were a bit "shifty", causing some switching of the flightline direction.

Lunchtime demos began without rain, but as the hour progressed it was obvious we would be getting a bit wet. The JR team had to cancel their reprise of the sailplane aero-tow. At the end of the demos, in a light drizzle, AMA District II Vice President Dave Mathewson officially inducted the author into the Model Aviation Hall of Fame. It is quite an honor to be recognized this way and at so early in my involvement in the hobby. Despite the threatening weather, the spectatorship on Saturday was probably as good as Fridays had been.

SEFLI set up a "John Sermos Memorial fund" last year to honor John's involvement in modeling for so many years, John passed away in early 2002. The fund raised money by selling much of John's old modeling equipment, models, and unmade kits. The monies are used to purchase prizes for junior flyers attending the show. A free raffle was set up for any junior AMA member to enter. Prizes such as model ARFS, motors, controllers and covering material were raffled off. Many of these prizes were subsidized by Hobby Lobby. The show coordinators also look for the "most impressive" junior flyer to give out a special award and plaque. The recipient chosen

would have to be the most skill junior pilot at the show. This year, the choice was easy. Jon Ziering of NJ was flying the heck out a small "E3D" type model. He received a Tracker II radio, big AXI brushless motor and controller.

Saturday night sent some people out to the Walton High School (about 1/2hr north of PV Campsite) for some "invitational" indoor flying. Many of the

lecturers at the days seminars put their fingers where their mouths were earlier in the day and flew demonstration flights with models as small as a few inch wingspan and less than 1 ounce! Spectators numbered around 100 at this event. It was organized and run by Gordon Johnson of the Boston Micronauts.

Around 8:00PM at the field, The Fayetteville Flyers (Atlanta), comprising of Clair and Ernie Schlumbeger, Randy Hawkins and Ric Vaughn, put on a nighttime aerial display with their models to music. Well lit models, some

complete with illuminated small "bomblets", dazzled the spectators while second annual NEAT Fair Nighttime Slow Flyer Contest was set-up on the north end of the field. 15 brave modelers ventured out into the darkness to test their skills of spot landings, pylon negotiation and limbo. After the first round was over, on 7 modelers had models in flying condition. 5 of those modelers chose to fly the second round. The wind was low most of the time from 8PM-11PM that evening, but at times it could pick up to 5-8MPH in a hurry, and go away as fast as it came. If you were unlucky enough to have to fly in one of these short spurts of wind, then the course could be quite challenging. Jason Shulman flew a Hacker powered foam Ultimate Bipe around the course in both rounds, lit with simple LED's around the model. Although Jason's depth perception in the spot landing tasks was just as poor as the other flyers. Jason held the model knife edge or did rolling circles around the pylon course only a few feet off the ground! Although Technically, Jason scored the highest number of points in the contest, he mentioned to me that he did it for "fun" and did not want to be considered for any places or prizes! Jerry Vasilik was awarded first prize after the event was over. Greg Cardillo earned second, and Gil Carpenter (SEFLI's own) earned third.

Sunday morning started a lot like Saturday; some fog, light drizzle now and again. The organizers decided to stay on the casual board all morning as flying was light. Those still with money to spend were still out and about buying from the vendors all morning. After the lunchtime demos were done, the SEFLI crew began breaking down the field. Of course, as this began to happen, the sun began to shine through and it turned out to be a very nice afternoon. The final raffle prizes were awarded, the final fences were taken down, and the "casual board" stowed away in my trailer about 3PM.

SEFLI was very happy with the show. This, now our fourth year, has shown that 250+ pilots, 1000+ models, 40+ vendors and 1000+ spectators can have a great time over a three day weekend (nearly four, considering how many people show up on Thursday!) Below is a listing of the core group of people responsible for the set-up, breakdown and conduct of the biggest electric model air show in the world! Looking forward to seeing you next year. Dates are: September 17,18,19 2004 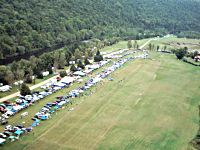